#EODE-THINK TANK / INTERVIEW OF LUC MICHEL BY THE ARAB WEBSITE ‘SITA INSTITUTE’ (I): DJIHADISMS – TERRORISM – IMMIGRATION. WHEN THE MIDDLE EAST AGENDA IS IMPOSED IN EUROPE … 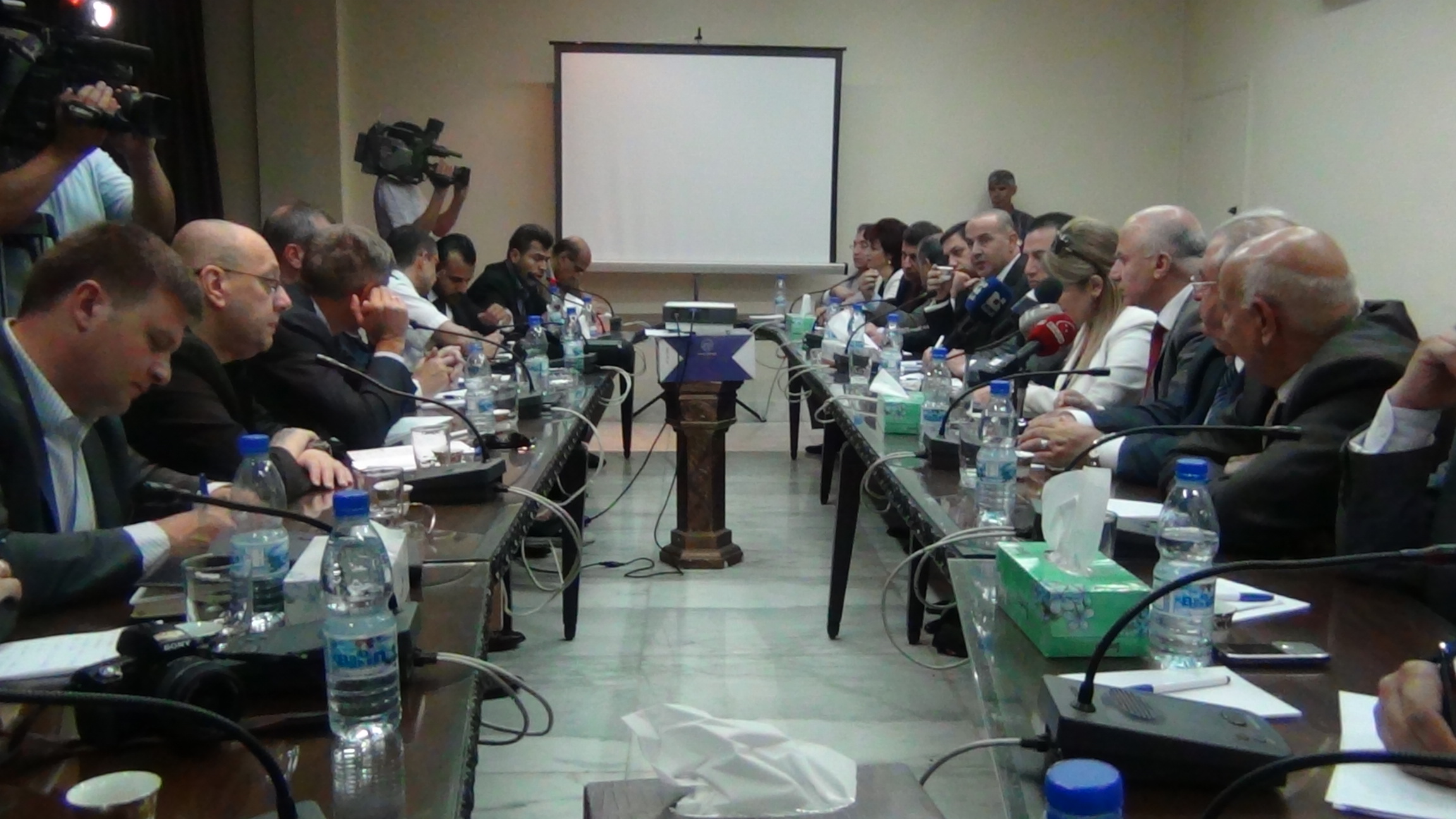 Part I
of The great interview of geopolitician Luc MICHEL
by Jan Vanzeebroeck and Samar Radwan (Beirut) …
FOR THE ARAB SITE ‘SITA INSTITUTE’:
DJIHADISMS – TERRORISM – IMMIGRATION. WHEN THE MIDDLE EAST AGENDA IS IMPOSED IN EUROPE …
(English version)

* SITA / Question:
AFTER SALAH ABDEL SALAM’S TRIAL, HOW DOES BELGIUM CONSIDER THE QUESTION OF « TERRORIST CELLS IN SLEEP »?

Luc MICHEL:
The trial of Salam Abdeslam is a blow for nothing, a trial where one has mainly raised judicial quibbles; but it is also as I call it a « big media mass » which is there to amuse the public, to create the myth of this « uncontrolled terrorism » and at the same time to make believe that the Western European States or the States NATO is fighting it.

The trial did not yield much, since the principal accused chose to remain silent, it is his right. The most interesting was the pass with the defense lawyer, Me Sven Mary, who actually raised in Belgian law irregularities that could lead to cancellation. There will surely be a great fight in the Court of Appeal and especially in the Court of Cassation. And there was especially a passing of arms between the lawyer and the Secretary of State for the Interior and Immigration, who criticized this lawyer for doing his job in defending his client.

More interesting was two years ago the trial of one of the great provider of jihadist sectors of the European Union to Syria and Iraq, that of Denis Lejeune said « the soumi ». The trial had been interesting because there the defense lawyers had raised a number of important points about the gray areas of these terrorist cases, including the absence among the accused of undercover agents of the Security of the Belgian state, which bore a heavy responsibility in sending jihadists to the Levant. There was, among other things, an undercover state security agent, who was not being summoned, who was under cover, and who accompanied the jihadists to Turkey at Zaventem airport. At that time, the defense lawyer revealed that this undercover agent was also the last person who met Mohammed Merah the day before the incidents that led to his execution.

* SITA / Question:
IS THE QUESTION OF ISLAMIST TERRORISM A RECENT TOPIC IN THE EUROPEAN UNION?

Luc MICHEL:
In the midst of all this there is of course the fundamental difference that must be made between the American-Western war of « terrorism » and the war « against terrorism ». The war on terror, it was launched at the time by Bush II, it’s a great theater, a comedy, the goal is not to annihilate terrorists, it is to use them in the service of the great American geopolitics. Terrorism is today, see the cases of Syria or Iraq, but also and especially of Africa, a pretext for Western interference, the interference of Western armies, the neutralization of the African army .

He has behind all this obviously, in Europe in any case, the question of what has been called « jihadists from the European Union ». It was raised in Syria in 2013 and 2014. This is a problem that I know well since in June 2013 I organized the first parliamentary mission from the European Union since the beginning of the war in Syria. were Flemish parliamentarians, regional and federal parliaments of Belgium. And we went to Damascus, to see the question that was beginning to arise from these « jihadists from the European Union ». Many had been arrested during the great battle of Quseir on the Lebanese border. We had also at the time, we have not spoken about it since but it was a real problem, arrested by NATO officers, especially Belgian and Dutch in Quseir. The Lebanese press talked about it. Then no one knows what they have become … In 2013 we had met the Syrian anti-terrorist services and we were able to talk to each other in the eyes with jihadists from the European Union precisely, especially from Spain from France, but also from the Russian Caucasus and Uzbekistan. When we returned to Belgium, our parliamentarians notably gave big TV shows in the Flemish and Dutch TVs. They denounced what we were announcing, what I was already announcing in June 2013, that is to say the threat of jihadists from the European Union, for whom the problem was not that they had gone into Syria or Iraq to fight, but they would return to Brussels, Paris, London or Berlin.

We preached in a deafening silence and of course nothing was done, at the time the secret services of NATO besides collaborated always with the secret services Turkish, American, Qatari and Saudi, for precisely the sending of these jihadists in Syria. I had personally raised this question at a Syrian Parliament Conference and asked the question, saying that « everything was ready for the return of these people and that a catastrophe was It was not a question of whether it was going to happen, but when it would take place … Nothing was done!
We returned for the third time in November 2014 in Damascus for the big conference organized by the Syrian Ministry of Justice on the theme of « terrorism and religious extremism », which the Syrian and Iranian call « takfirism » and which we call of a term, which sometimes shocked the Muslims but which is speaking in Europe, that of « jihadism », a term which is here assimilated to this Takfirist terrorism. In November 2014, we spoke again, including raising the issue of a « European 11/11 future » in the forum of this conference! This happened much later in 2015 with the Charlie Hebdo affair, the various attacks that bloodied Belgium, France, Great Britain and Germany. Again we have not been heard!

We were able to meet the people of the Damascus Anti-Terrorist Prosecutor’s Office, and this is something totally hidden in Europe, but the Syrian state is a state of law and it is an extremely powerful state. and structured. They are not « militias fighting other militias », there is an Anti-Terrorist Prosecutor’s Office that fights terrorism on the basis of the anti-terrorist laws of the Syrian state, and in extremely regular trials. We were able to meet an exceptional young woman, the young prosecutor, who seems to be coming straight out of an American television series, who runs the prosecutor’s office, and we were able to attend hearings where terrorists’ accomplices were judged …

* SITA / Question:
YOU HAVE FIXED THE GENERAL FRAMEWORK, BUT RETURN TO « DORMANT CELLS »?

Luc MICHEL:
In the middle of all this, are there dormant cells in Europe?
Of course, yes! All the cases that break out see new cells discovered, see that all the subtle work carried out by the secret services and the European security services does not lead to much. When he does not reveal besides that complicities exist, that there are attempts of the infiltrated agents, that there are attempts of controls. The Europeans believed that they could master the jihadist phenomenon, they thought themselves more intelligent than everyone else, it was not the case!

In the case of Daesh, it is necessary to read the book of Samuel Laurent, called « The Islamic State », to understand that it was a highly structured de facto state, with its army, its military advisers, its intelligence services education, its tax collectors. But above all insists the auteu, his extremely well-structured secret services, which on several occasions have even infiltrated the European secret services. When there was the case in January 2015 in Paris attacks Bataclan, then the hyperkasher – and again the press has released an article and then we heard more about it – we have discovered that one of the jihadists was living with a chief warrant officer of the French Gendarmerie, who was working precisely at the French Intelligence Service Center near Versailles. At the time, there was an article in some French newspapers, a dispatch from AFP, only the Algerian press reprized at the time the articles and analyzes that I had devoted to this subject …

Last subject when talking about dormant cells, I also raised it during my third visit in November 2014 in Syria, it is the question of women and girls parties doing what is called in Europe the « jihad by marriage « or » jihad by sex « . Or simply those who have gone to join their companions or their husbands. This is a big question right now, since their families have the gall to ask the Belgian and French states to help repatriate them, while they have been there to help commit war crimes and crimes. crimes against humanity. And that they must in all fairness be condemned in Syria by the courts of the Syrian state, according to the Syrian laws. It’s a bit too easy to repatriate. I raised this issue of women because they have had little involvement in European terrorism, but we have the example of Wahhabi terrorism or jihadism in the Russian Caucasus. And there are all these women, especially in recent attacks in Moscow or Volgograd (in 2015) and well, who committed these attacks. They are often women of the European, Islamized type. that nothing can recognize in a crowd when they are dressed in the European. They are an extremely powerful danger for all European states, this will be the next step in this jihadist terrorist cancer that is eating away at the European Union.

* SITA / Question:
YOU ARE OFTEN EVOKING « THE SCENARIO OF THE DEVIL ». WHAT IS IT ABOUT ?

Luc MICHEL:
This European Union, which with the Americans and the NATO countries, tried what I called « the devil’s scenario », that is to say that they believed that they could exploit terrorism jihadist to serve their geopolitical interests. But as the old French proverb says « to have dinner with the devil, you have to take a long spoon or you burn your fingers », today the European powers, the European secret services, have burned not the fingers but the arm and elbow!

Written presentation of the Audio Interview of Geopolitician Luc MICHEL (Administrator-General of EODE) granted in Brussels on 22 February 2018.

(*) The SITA INSTITUTE center is a site specialized in the study, the follow-up and the diagnosis of political, international, strategic and geopolitical situations, where it always tries to involve people specialized in these fields for the writing, the analysis and / or explanation. Inform the user about important issues and publish them clearly and deeply to learn about these events and their implications for the human and the community. In addition, the Center is considered an open scientific venue for the writing and encouragement of all writers and specialists looking for a site to publish their ideas and analyzes, provided that they are compatible with the terms and conditions of use of the site.
_____________________